Facebook is a great platform for animal shelters to use to generate interest in their animals that are looking to be rehomed.

But when Texas based City of Wichita Falls Animal Services shared a picture of a husky who was up for adoption, they didn’t anticipate somebody else stealing all of the attention.

While the husky named Sky is undoubtedly beautiful, the employee kneeling next to her was the one who stole everybody’s hearts.

The man, named Zackry Majewski, is the true definition of tall, dark and handsome. He has tattoos, dark hair, a short beard, and the most piercing blue eyes- which are pretty much identical to Sky the husky’s.

Naturally, it wasn’t long until the picture went viral. It now has over 21k reactions, 27k comments and 15k shares, and some of the comments are absolutely hilarious.

“Zackry Majewski started with us in October of 2020.” The post was captioned.”He has a great compassion for the animals in our care. He is especially fond of Huskies and can always be found snuggling with a puppy in the shelter. On his time off Zac enjoys hiking and listening to Country Music.” the post reads. “Of course, Zac chose our resident Husky to spotlight. Sky is a beautiful girl waiting for a forever home.”

The photo of the beautiful man and dog was enough to send most commenters into a frenzy.

“Is the man available for adoption?” one person asked, while another joked, “Wait?! There’s a dog in the picture?”

“What’s the adoption fee for Zac? Is he house trained?” another person enquired.

Zackry Majewski started with us in October of 2020. He has a great compassion for the animals in our care. He is…

Zackry was pleasently surprised when he came into work one day and discovered that the picture of him and Sky had gone viral.

“I don’t even have Facebook. People called me into the office, like my boss, and she was telling me, ‘it’s blowing up right now,’ and then it just kind of increased throughout the day,” Zackry told News Channel 6 about the reaction to the post.

While you may be disappointed to learn that this blue-eyed cutie (the man- not the dog) doesn’t have Facebook, he does have Snapchat and Instagram.

Zackry revealed that after the picture went up, over one hundred people started following him on Snapchat and Twitter. We bet that number is now in the thousands!

Not only were people filling in adoption forms for Sky, but people were also showing interest in many other animals in their care.

People online suggested that Zackry models with all the animals who need to be rehomed in the future, and he’s humbly agreed to do so.

‘”A lot of people want me to, and it’s just not something I like to do but, if it helps animals get adopted, then I will,” he said. “It got Sky adopted in like an hour yesterday, and we had over a hundred calls on her so, it was pretty great.”

It’s brilliant news that Sky has been adopted already! And if it means that we get to see more pictures of Zackry, then it’s a win-win situation. 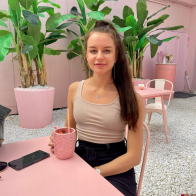 Emma Shallcross is a contributor at Animal Channel.